Defing common sense for cosmetic
inspections; a camera for inspection at an angle

The Super Focusing Camera captures images at an angle, but the whole image is in focus! 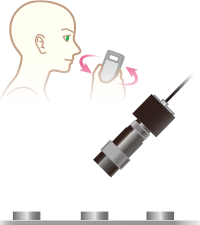 When capturing an image at an angle with a standard camera in the way a visual inspection is conducted, the captured image is only partially in focus and has perspective. It is therefore not suitable for inspection.
The Super Focusing Camera solves this problem.
In addition to realizing high-accuracy inspections, it contributes to the reduction of inspection-site costs.

Three features only possible with the Super Focusing Camera

1. Defects such as scratches or dents can be seen more clearly

Cast a shadow with a regular
reflection light for higher contrast. 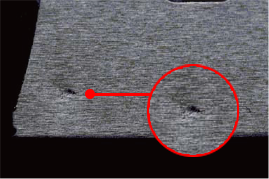 Image captured from
directly above by using a standard camera 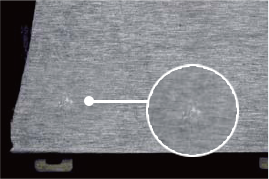 2. Sections that are not visible when an image is captured from directly above can now be inspected

Complex shapes might not be inspectable when using a camera from above, but using a camera at an angle can make issues obvious. This makesto the capture of satisfactory images of the area to be inspected possible.

3. Images can be captured simultaneously from 3 sides

There is no need to prepare the same number of cameras and lightings as the number of inspected sides. Instead, one high-quality image that showing three sides can be captured. As a result, inspections are feasible with less cameras and captured images, and the entire inspection project can be done faster and with reduced costs.

Defects in connector holes may not be shown in images captured by a vertical/horizontal camera. However, the Super Focusing Camera can reliably detect such defects. 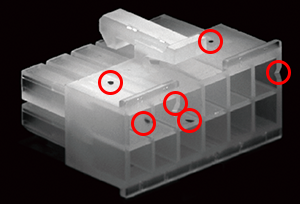 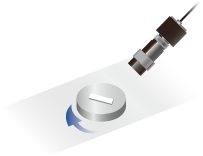 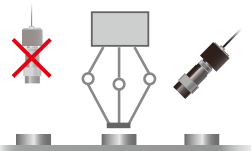 The Following is a list of Super Focusing Camera applications.